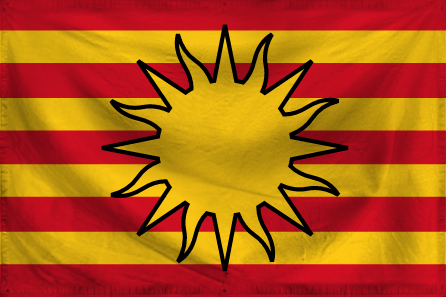 The United Sun Republic of Solarampa is a massive, genial nation, ruled by The Solar President Martin Tomek with a fair hand, and remarkable for its museums and concert halls, irreverence towards religion, and devotion to social welfare. The compassionate, hard-working, democratic, cheerful population of 4.705 billion Solarampas hold their civil and political rights very dear, although the wealthy and those in business tend to be viewed with suspicion.

The large, liberal government juggles the competing demands of Education, Administration, and Industry. It meets to discuss matters of state in the capital city of Solar Terra. The average income tax rate is 90.9%, and even higher for the wealthy.

The frighteningly efficient Solarampan economy, worth 797 trillion Drenits a year, is quite specialized and led by the Information Technology industry, with major contributions from Tourism, Trout Farming, and Book Publishing. Average income is an impressive 169,532 Drenits, and evenly distributed, with the richest citizens earning only 2.2 times as much as the poorest.

10-year-olds who struggle with integrating by parts are considered slow learners, 100-year-old politicians are now a thing of the past, citizens are allowed to rise or fall based on their own merits, and the Ministry of Health has reported a sharp increase in the incidence of delayed menopause. Crime, especially youth-related, is totally unknown. Solarampa's national animal is the kitten, which frolics freely in the nation's many lush forests.