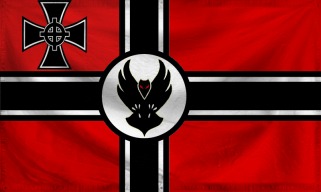 The Armed Reich of Svarttjern is a gargantuan, environmentally stunning nation, ruled by Reichsführer Gunnar Siggurdson with an iron fist, and remarkable for its museums and concert halls, sprawling nuclear power plants, and unlimited-speed roads. The hard-nosed, hard-working, cynical, humorless population of 21.598 billion Svarttjernians are ruled by a mostly-benevolent dictator, who grants the populace the freedom to live their own lives but watches carefully for anyone to slip up.

The tiny, corrupt government is primarily concerned with Defense, although Education, Healthcare, and Law & Order are also considered important, while Spirituality and Social Policy aren't funded at all. It meets to discuss matters of state in the capital city of Heimdal. The average income tax rate is 7.9%, but much higher for the wealthy.

The all-consuming Svarttjernian economy, worth a remarkable 4,060 trillion Reichsmarks a year, is quite specialized and mostly made up of the Arms Manufacturing industry, with significant contributions from Information Technology, Automobile Manufacturing, and Gambling. Black market activity is rampant. State-owned companies are common. Average income is an impressive 187,995 Reichsmarks, and distributed extremely evenly, with little difference between the richest and poorest citizens.

Toy versions of heroin paraphernalia let kids pretend to be their favourite TV characters, advertisers are struggling to make water sound cool to a twitchy public, pre-takeoff checks last longer than the flights themselves, and children who can't memorize their multiplication tables are sent to the mines. Crime, especially youth-related, is totally unknown. Svarttjern's national animal is the raven, which soars majestically through the nation's famously clear skies, and its national religion is agnosticism.

Svarttjern is ranked 2,984th in the world and 7th in Nazi Europa for Highest Economic Output, with 4,060 trillion Standard Monetary Units.

Most Recent Government Activity: 8 days ago