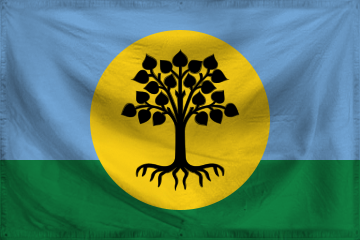 The Populgoverne of Alcantaria is a gargantuan, genial nation, remarkable for its keen interest in outer space, free-roaming dinosaurs, and prohibition of alcohol. The compassionate population of 17.712 billion Alqantarianes are fiercely patriotic and enjoy great social equality; they tend to view other, more capitalist countries as somewhat immoral and corrupt.

The government — a sprawling, bureaucracy-choked, socially-minded morass — juggles the competing demands of Education, Healthcare, and Environment. It meets to discuss matters of state in the capital city of Cive du Alqantarie. The average income tax rate is 96.9%.

The frighteningly efficient Alqantariana economy, worth a remarkable 2,170 trillion Qantares a year, is highly specialized and mostly made up of the Information Technology industry, with significant contributions from Book Publishing and Tourism. State-owned companies are reasonably common. Average income is an impressive 122,527 Qantares, and distributed extremely evenly, with practically no difference between the richest and poorest citizens.

Voting is compulsory, formerly internationally exported goods are now given away for free, citizens praise the weeds that overwhelm their narrow vegetable realm, and the question of 'what is Leader's favorite color?' has been given a priority rating of burnt-orange. Crime, especially youth-related, is totally unknown, thanks to a very well-funded police force and progressive social policies in education and welfare. Alcantaria's national animal is the Ocele, which frolics freely in the nation's many lush forests.

Most Recent Government Activity: 21 hours ago