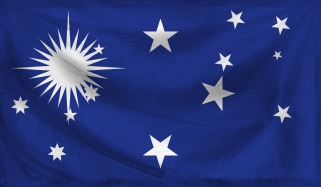 The Troisième République of Opalaland is a gargantuan, socially progressive nation, ruled by President Laura Roslin with a fair hand, and remarkable for its otherworldly petting zoo, free-roaming dinosaurs, and daily referendums. The hard-nosed, hard-working, democratic, cheerful population of 25.714 billion Opalalandais hold their civil and political rights very dear, although the wealthy and those in business tend to be viewed with suspicion.

The relatively small, liberal, outspoken government juggles the competing demands of Industry, Education, and Healthcare. It meets to discuss matters of state in the capital city of Bibliotheque. The average income tax rate is 15.7%, but much higher for the wealthy.

The frighteningly efficient Opalalandais economy, worth a remarkable 6,004 trillion opiates a year, is fairly diversified and led by the Tourism industry, with major contributions from Book Publishing, Information Technology, and Gambling. Average income is an amazing 233,503 opiates, and evenly distributed, with the richest citizens earning only 2.3 times as much as the poorest.

The government's giant servers are often used as a tourist trap, adults pretending to be teenage girls claim to have wholesome motives, most households' childcare costs are higher than their mortgage payments, and cosmopolitan citizens ask what their countries can do for them. Crime, especially youth-related, is all-pervasive, probably because of the absence of a police force. Opalaland's national animal is the owl, which is also the nation's favorite main course.

Opalaland is ranked 238,291st in the world and 163rd in Democratic Socialist Assembly for Fattest Citizens, with 2.67 Obesity Rate.