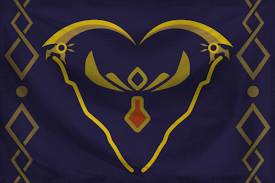 The Imperium of New Pekoland is a massive, orderly nation, ruled by Emperor Mookara with an iron fist, and remarkable for its museums and concert halls, multi-spousal wedding ceremonies, and free-roaming dinosaurs. The hard-nosed, cynical population of 4.003 billion Nousagians are ruled by a mostly-benevolent dictator, who grants the populace the freedom to live their own lives but watches carefully for anyone to slip up.

The medium-sized, corrupt, well-organized government is dominated by the Department of Defense, with Administration, Law & Order, and Education also on the agenda. It meets to discuss matters of state in the capital city of Pekamura. The average income tax rate is 90.9%, and even higher for the wealthy.

The frighteningly efficient Nousagian economy, worth 921 trillion Pera קs a year, is broadly diversified and led by the Arms Manufacturing industry, with significant contributions from Tourism, Information Technology, and Beef-Based Agriculture. Black market activity is rampant. State-owned companies are common. Average income is an amazing 230,226 Pera קs, and evenly distributed, with the richest citizens earning only 3.0 times as much as the poorest.

Soldiers must key in their passwords every time they want to reload their weapons, members of majority races are forced out of their homes to make way for Bigtopians, business meetings across the country are interrupted by the sound of squeaking whoopee-cushions, and a recent political speech drew the ire of nerds everywhere after the speaker claimed that Darth Vader was Harry Potter's father. Crime, especially youth-related, is totally unknown, thanks to a capable police force and progressive social policies in education and welfare. New Pekoland's national animal is the Beast, which frolics freely in the nation's many lush forests, and its national religion is Church of Sora.

New Pekoland is ranked 13,017th in the world and 2nd in Grand Avalon for Most Developed, scoring 88.65 on the Human Development Index.

Most Recent Government Activity: 10 hours ago