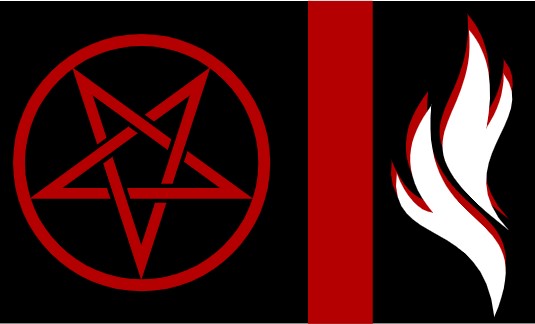 The Cursed Burning Legions of Hellslayer is a colossal, orderly nation, ruled by Lord Demon Jax Arcanic with an iron fist, and notable for its avowedly heterosexual populace, keen interest in outer space, and suspicion of poets. The hard-nosed, hard-working, cynical, humorless population of 5.162 billion Demons are kept under strict control by the oppressive government, which measures its success by the nation's GDP and refers to individual citizens as "human resources."

The medium-sized, corrupt, moralistic, well-organized government juggles the competing demands of Defense, Law & Order, and Education. It meets to discuss matters of state in the capital city of Inferno. Citizens pay a flat income tax of 72.9%.

The frighteningly efficient Hellslayerian economy, worth a remarkable 1,472 trillion Souls a year, is quite specialized and mostly comprised of black market activity, especially in Arms Manufacturing, Information Technology, Retail, and Uranium Mining. Average income is an amazing 285,339 Souls, with the richest citizens earning 9.0 times as much as the poorest.

Companies have begun running campaigns to stop people from remembering their brand name, mantis shrimp studies is academia's fastest-growing field, no-one can foil the ambitions of Big Aluminium, and 10-year-olds who struggle with integrating by parts are considered slow learners. Crime, especially youth-related, is totally unknown, thanks to a very well-funded police force and progressive social policies in education and welfare. Hellslayer's national animal is the Devil, which teeters on the brink of extinction due to widespread deforestation, and its national religion is Jaxania.

Hellslayer is ranked 193,503rd in the world and 216th in Confederation of Corrupt Dictators for Fattest Citizens, with 8.33 Obesity Rate.

The Destroyers of Christianity,

The land of certain death,