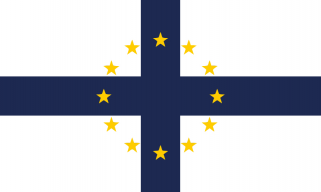 The Democratic Commonwealth of Ecclestia is a gargantuan, socially progressive nation, ruled by the President of Ecclestia with a fair hand, and remarkable for its daily referendums, punitive income tax rates, and restrictive gun laws. The compassionate, democratic, cheerful, devout population of 17.413 billion Ecclestians enjoy a sensible mix of personal and economic freedoms, while the political process is open and the people's right to vote held sacrosanct.

The medium-sized government prioritizes Education, with Healthcare, Environment, and Industry also on the agenda, while Defense receives no funds. It meets to discuss matters of state in the capital city of Birmingham. The average income tax rate is 64.8%, and even higher for the wealthy.

The frighteningly efficient Ecclestian economy, worth a remarkable 3,995 trillion Ecclestian Pounds a year, is quite specialized and led by the Information Technology industry, with significant contributions from Tourism, Book Publishing, and Retail. Average income is an amazing 229,441 Ecclestian Pounds, and distributed extremely evenly, with little difference between the richest and poorest citizens.

Explicit slash fiction is repackaged for kindergarten kids as stories about friends cuddling friends, older citizens lament over the loss of law and order, crossword puzzles have been co-opted as a symbol of racial discrimination, and kindergartners' favourite dance move is the stop-drop-and-roll. Crime, especially youth-related, is totally unknown. Ecclestia's national animal is the Wallaby, which is also the nation's favorite main course, and its national religion is Christianity.

Ecclestia is ranked 243,420th in the world and 83rd in Union of Christian Nations for Most Secular, with 0.8 Atheism Rate.