Well that was a tumultuous year. A falling-out with our host, the death of NS2, a new forum, and some new features, one of which invoked howls of protest that reverberate to this day. In fact we still have to finish cleaning up that mess. But never mind! It's time to reflect on the good. And top of the list is the fact that we're still here. Seven years on, I still don't think there's anything quite like this place. Thanks for making it that way.

So here is a card for you. I made it myself, can you tell? 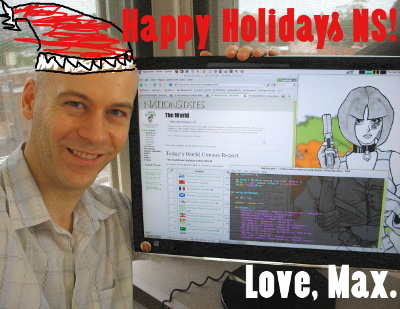 A hardware failure in networking equipment at our host caused a lot of timeouts and slow responses yesterday. This is information that would have been useful to you then, but I couldn't post it because the site was too slow. You see the irony. Our server was just sitting there, engines idling, wondering where everybody went. Then Cisco fixed the problem and everyone descended on it again like a horde of rampaging Vikings. Vikings with political opinions.

This must be the most useless status update I've ever posted.

There have been lots of changes recently, so it must be time for another MaxChat! No, I'm not sure how one follows from the other either. But we're still doing it.

This is an online chat where most of the mod/admin team and I field questions from players about the game: what the hell we think we're doing, why we just did that thing we did, who put us in charge; that kind of thing. Come along armed with your own question, or just sit back and watch!

When: Roughly afternoon/night on Saturday 19th September, depending on where you live. Click here for your local time!
How: Join #nationstates on irc.gamesurge.net. See here for details!

Regions may now proudly hoist a flag over their domain! To ensure yours correctly symbolizes every aspect of all resident nations, speak to your WA Delegate or Founder!

Since nothing in the server room has caught on fire recently, we're bumping up the frequency of the (now quite poorly named) daily update. WA endorsements will now be tallied twice a day, not once, providing double the number of opportunities to make your regional WA Delegate nervous.

You can find some discussion about this here.

Updates are coming thick and fast at the moment. A few highlights:

Speaking of which, we also have a new Resolution type!

A Liberation Resolution overrides any Delegate password in the nominated region, allowing other nations to enter freely. (It doesn't restrict the Delegate's ability to eject, ban, or do anything else; nor does it affect regions with Founders.) This allows the World Assembly to further its aims of bringing freedom and justice to the world, or grossly overstep its moral authority, depending on your perspective.

The new forum has officially passed its load test—thanks to everyone who helped put it through its paces! There are still a few tweaks to be made, but since it's in pretty good shape, we're peeling off the "BETA" tag.

The old Jolt forum isn't moving, but will be no longer linked from the sidebar. A permanent link to it can be found here.

A Commendation expresses the World Assembly's warm support and approval for the nation or region in question; a Condemnation, its outrage and dismay. Either way, the recipient is branded with the graphic you see above, ensuring their fame (or infamy) is broadcast for all to see.

The usual Resolution rules apply: you need to be a WA member with at least two endorsements to Propose a Commendation or Condemnation, and passed Resolutions can be repealed (which removes the badge).

And, of course, exactly when and why these Resolutions should be employed is a matter for World Assembly members. But I'm sure you'll think of something.

The Sad State of NationStates 2

I realize that last you heard, NationStates 2 was my baby, endorsed by me and financially supporting me and this site. So allow me to clear that up.

For months now, Jolt has been operating NationStates 2 without my authorization, profiting from my trademark, domain name, and original game design while paying me nothing. As you might expect, I've been less than thrilled about this. I haven't taken action to shut them down, though, as I didn't want NS2 players to be left in the lurch. NS2 is not my favorite game—parts of it are great, but as a whole it's a pale, deformed version of the game I designed—but some people are enjoying it, and are invested in their nations. So I've let it run, even though I feel pretty ripped about Jolt taking my work.

Now Jolt says that NS2 is closing, and "substantial work" will be performed on it, and eventually it may rise again in retooled form. I have no idea what this means, but I note that Jolt's strategy these days is all about herding players from less profitable games to more profitable ones. I was told to push players from NS1 to NS2; now NS2 players are being pushed onward to something else. The ultimate destination of this quest over burning bridges, I imagine, must surely be a game in which players compete to throw the most cash at Jolt.

I also note that Jolt's two flagship products are copies of other people's games with an unrelated brand name stuck on top: "Legends of Zork," for example, is a clone of Dragon Tavern, and has little to do with Zork, while "Utopia Kingdoms" is a rebadged Khan Wars that has little to do with Utopia. Other Jolt games, like Truckz (and, for a while, NationStates), were acquired from indy designers and Jolt's contribution has been to insert ads.

Which is fine; after all, Jolt is a business, albeit one that ignores my invoices. But this is not the kind of thing that implies a commitment to gameplay or community. So if I was a NationStates 2 player, I would not hold out much hope that this "substantial work," if it occurs, is for my benefit. I would guess it is more about developing exciting new ways to pay Jolt money. And I would not be surprised if any reworked NS2, if it does eventually emerge, turns out to be an entirely new game, copied from somewhere else, with a big brand name and no real connection to NationStates.

I've always said that if it ever became impossible for me to host NationStates, I'd release the source code for free. Because I'm not here to make money. Even when I created this game, back in 2002, I hoped it could help promote my novels, but a big reason for doing it was just because I thought it would be cool. And that's the main reason I run this site today: because we're a cool site, with a smart, quirky, sometimes prickly, and occasionally bizarre community, a style of debate and discussion you don't see anywhere else, and almost seven years of history.

We have millions of nations, and probably as many stories. Players here reminisce about regions that rose and fell, about Delegates who were betrayed, about alliances that were infiltrated, and ideological battles waged on the forum. I don't think Jolt gets that. I don't think they understand there's more to a game than its revenue—that games can become universes, and people live there. And that sincerely disappoints me, because I hoped NS2 could be something special.

NationStates—the original—is, thankfully, self-hosted these days. We have some plans, but our most important one is to not go anywhere. Thanks for sticking with us.

Those new NSCode tags proved popular, so now you can also use them in telegrams and Regional Message Board posts. For examples, see the Technical section of the FAQ.

Regional leaders, you have a couple of new tags to spice up your World Factbook Entries. We've added [nation] and [region] tags, so you can steer visitors directly to the person they need to endorse to avoid your wrath. And there's a new [url] tag for creating links to your region's own site (or perhaps a key thread in our very own new forum!). See your Regional Control panel for details.

We are trialing a new forum! Check it:

Hosting our own forum will give us a lot of flexibility, but for now we're just trying to figure out whether it's viable! If we get through the load test, we'll look more at tweaking the cosmetics and features.

We looked at a variety of mobile platforms--the Apple iPhone, Google Android, PlayStation PS--before settling on the Nintendo DS. It's a terrific, cutting-edge device that's just beginning to attract some attention... just like us!

For more information about this exciting development, see http://nintendo.nationstates.net!

I had a dream: we would snuggle close to a professional games development company, and they would deliver a brilliant, shining NationStates sequel while hosting us here for all eternity. But that didn't really work out, so we split.

NationStates is now hosted by me, and doesn't have terribly much to do with NS2 any more. The good news is that means we are free to do what we like here, including adding a few new features.

One thing this experience has taught me is how special the game is. We have something here. And it's due a little love and attention.

Off We Go Again

Well! That didn't last long. We are on the move to a new host, and so will suffer a little downtime over the next few days.

The "Nation Restoration" feature has been temporarily turned off, so we can shift those two million archived nations across without bringing down the entire game. Once we're moved, you will once again be able to restore that old, deleted nation.

Thanks for your patience!