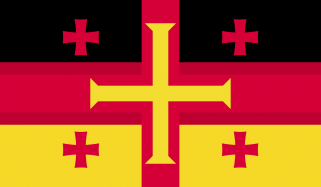 The Community of Zulcanmaral is a colossal, safe nation, ruled by Juunei with an even hand, and remarkable for its complete lack of prisons, keen interest in outer space, and absence of drug laws. The compassionate, democratic population of 9.249 billion Zul'ins have some civil rights, but not too many, enjoy the freedom to spend their money however they like, to a point, and take part in free and open elections, although not too often.

The enormous government juggles the competing demands of Healthcare, Education, and Environment. It meets to discuss matters of state in the capital city of Drogdoyolos. The average income tax rate is 80.1%, and even higher for the wealthy.

The thriving Zulcanmaralian economy, worth 640 trillion Baladoes a year, is highly specialized and mostly made up of the Information Technology industry, with significant contributions from Tourism, Trout Farming, and Book Publishing. State-owned companies are reasonably common. Average income is 69,263 Baladoes, and distributed extremely evenly, with little difference between the richest and poorest citizens.

It's always rabbit season, whipping posts and lashes have been transferred to the Historical Museum of Zulcanmaralian Embarrassments, religious education is a new government priority, and sections of the police receive paramilitary training. Crime, especially youth-related, is totally unknown, thanks to a capable police force and progressive social policies in education and welfare. Zulcanmaral's national animal is the Monitor Lizard, which frolics freely in the nation's many lush forests, and its national religion is Zul'xinkaal.

Zulcanmaral is ranked 261,763rd in the world and 1,223rd in 10000 Islands for Largest Retail Industry, scoring -15.87 on the Shrinkwrap Consignment Productivity Index.