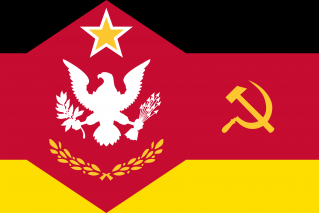 The Free Union of Zeklandia is a gargantuan, efficient nation, ruled by Zeklandia the Great with an even hand, and notable for its museums and concert halls, anti-smoking policies, and keen interest in outer space. The compassionate, democratic, cheerful population of 15.976 billion Zeklandren are fiercely patriotic and enjoy great social equality; they tend to view other, more capitalist countries as somewhat immoral and corrupt.

The government — a sprawling, bureaucracy-choked, socially-minded morass — juggles the competing demands of Education, Healthcare, and Environment. It meets to discuss matters of state in the capital city of Seklanden. The income tax rate is 100%.

The frighteningly efficient Zeklandian economy, worth a remarkable 2,644 trillion National Credits a year, is driven entirely by a combination of government and state-owned industry, with private enterprise illegal. The industrial sector is solely comprised of the Information Technology industry. Average income is an impressive 165,501 National Credits, and distributed extremely evenly, with practically no difference between the richest and poorest citizens.

Military officials are questioning the policy of ceding the nation's territory in exchange for promises not to invade it, a new "thought police" branch is being developed, diplomats are always trying to convince other nations to adopt l33t speak, and illegal hunting is rife after veganism was recently made compulsory. Crime is totally unknown, thanks to a well-funded police force and progressive social policies in education and welfare. Zeklandia's national animal is the Phoenix, which soars majestically through the nation's famously clear skies.

Zeklandia is ranked 16,116th in the world and 233rd in 10000 Islands for Most Efficient Economies, scoring 99.94 on the Krugman-Greenspan Business Outlook Index.