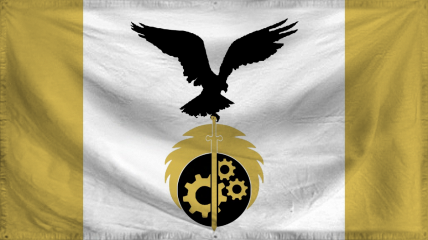 The Post-Holy Empire of Xarstaria is a colossal, environmentally stunning nation, remarkable for its state-planned economy, fear of technology, and infamous sell-swords. The hard-nosed, cynical, humorless, devout population of 5.802 billion Xarstarians are ruled without fear or favor by a psychotic dictator, who outlaws just about everything and refers to the populace as "my little playthings."

The enormous, corrupt, moralistic, socially-minded government juggles the competing demands of Defense, Law & Order, and Spirituality. It meets to discuss matters of state in the capital city of Vigilantes Vestrvm. The average income tax rate is 95.1%.

The strong Xarstarian economy, worth 886 trillion Silver Bars a year, is driven entirely by a combination of government and state-owned industry, with private enterprise illegal. However, for those in the know, there is an enormous, deeply entrenched, extremely specialized black market in Arms Manufacturing and Uranium Mining. The private sector mostly consists of enterprising ten-year-olds selling lemonade on the sidewalk, but the government is looking at stamping this out. Average income is an impressive 152,756 Silver Bars, and distributed extremely evenly, with little difference between the richest and poorest citizens.

Suppression of pro-democracy protests is a daily occurrence, the government is seen to favor traditionalist religions, the police are tightening their grip on alcohol smugglers, and nudity is frowned upon. Crime, especially youth-related, is totally unknown, thanks to the all-pervasive police force and progressive social policies in education and welfare. Xarstaria's national animal is the Ocean Sunfish, which frolics freely in the nation's sparkling oceans, and its national religion is Yellowism.

Xarstaria is ranked 45,251st in the world and 904th in the Rejected Realms for Most Advanced Public Education, scoring 4,026.66 on the Edu-tellignce® Test Score.