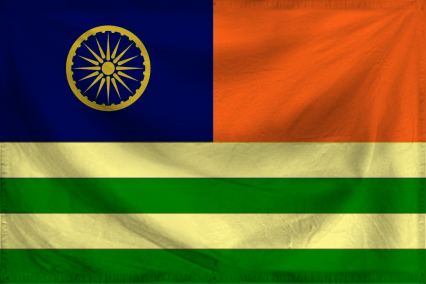 The Volinovian Memorial of Vuclen is a massive, efficient nation, ruled by Varunillios Gounudia with an even hand, and renowned for its disturbing lack of elderly people, complete lack of prisons, and irreverence towards religion. The compassionate population of 3.122 billion Vuclens have some civil rights, but not too many, enjoy the freedom to spend their money however they like, to a point, and take part in free and open elections, although not too often.

The medium-sized government juggles the competing demands of Healthcare, Defense, and Education. It meets to discuss matters of state in the capital city of New Yavana. The average income tax rate is 43.8%, but much higher for the wealthy.

The powerhouse Vuclenian economy, worth 306 trillion Ployze drachmas a year, is broadly diversified and led by the Arms Manufacturing industry, with major contributions from Information Technology, Basket Weaving, and Book Publishing. State-owned companies are reasonably common. Average income is 98,132 Ployze drachmas, and distributed extremely evenly, with little difference between the richest and poorest citizens.

It's normal to start working life with crippling financial debt, the police have been swamped with requests to stay up past bedtime, prematurely retired barristers twitch in anxiety when they talk about their courtroom experiences, and a petition to make petitions important again has been deemed unimportant. Crime, especially youth-related, is totally unknown, thanks to a capable police force and progressive social policies in education and welfare. Vuclen's national animal is the Wolf, which teeters on the brink of extinction due to widespread deforestation, and its national religion is Hellenic-Hinduism.

Most Recent Government Activity: 12 hours ago

Order of the Saint Dumas,