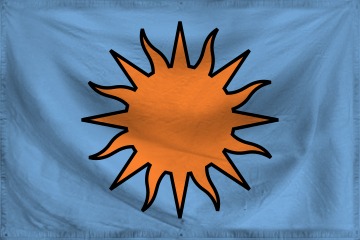 The Blessed and Holy Land

The Holy Matriarchy of The Blessed and Holy Land is a gargantuan, orderly nation, ruled by the High Priestess with an iron fist, and notable for its avowedly heterosexual populace, multi-spousal wedding ceremonies, and infamous sell-swords. The hard-nosed, hard-working, cynical, humorless, devout population of 13.634 billion Holylanders are ruled with an iron fist by the corrupt, dictatorship government, which oppresses anyone who isn't on the board of a Fortune 500 company. Large corporations tend to be above the law, and use their financial clout to gain ever-increasing government benefits at the expense of the poor and unemployed.

The minute, corrupt, moralistic, pro-business, well-organized government, or what there is of one, is solely concerned with Spirituality. It meets to discuss matters of state in the capital city of Goddess' Retreat. Income tax is unheard of.

The frighteningly efficient Holylandian economy, worth a remarkable 4,190 trillion faith credits a year, is driven almost entirely by the private sector, which is broadly diversified and led by the Gambling industry, with major contributions from Retail, Uranium Mining, and Pizza Delivery. Average income is an amazing 307,359 faith credits, but there is a vast disparity between incomes, with the richest 10% of citizens earning 2,878,783 per year while the poor average 2,766, a ratio of 1,040 to 1.

Foreign students are expected to have a Kegmeister Grade Average of 36-24-36 to qualify for university, genetic researchers have been expelled, artists regularly face criminal charges and art-burning parties are common, and no animal is considered endangered if there's another that looks kind of like it. Crime is so common that it is unusual to encounter someone following the law, perhaps because of the country's complete lack of prisons. The Blessed and Holy Land's national animal is the cat, which is also the nation's favorite main course, and its national religion is Goddess Worship.

The Blessed and Holy Land is ranked 239,459th in the world and 8,365th in The East Pacific for Most Advanced Law Enforcement, scoring -30.33 on the Orwell Orderliness Index.

Most Recent Government Activity: 18 days ago