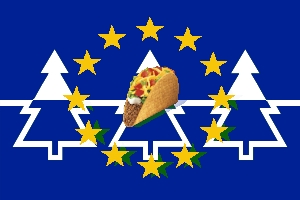 The Republic of Taco Respublic is a gargantuan, genial nation, renowned for its smutty television, aversion to nipples, and keen interest in outer space. The compassionate, democratic, cheerful, devout population of 18.702 billion Taco Respublicians love a good election, and the government gives them plenty of them. Universities tend to be full of students debating the merits of various civil and political rights, while businesses are tightly regulated and the wealthy viewed with suspicion.

The large government juggles the competing demands of Education, Environment, and Healthcare. It meets to discuss matters of state in the capital city of Zeppelin. The average income tax rate is 82.6%, and even higher for the wealthy.

The frighteningly efficient Taco Respublician economy, worth a remarkable 2,296 trillion Shrooms euros a year, is highly specialized and led by the Information Technology industry, with major contributions from Tourism, Book Publishing, and Basket Weaving. State-owned companies are common. Average income is an impressive 122,804 Shrooms euros, and distributed extremely evenly, with practically no difference between the richest and poorest citizens.

Arbitration is mightier than the sword, abattoirs are struggling with the directive to 'wait until the animal dies of a ripe old age', giggling elementary school newspaper reporters want to know why Leader is a silly poophead, and children searching for cat videos must watch dogs in equal proportion. Crime is totally unknown, thanks to a capable police force and progressive social policies in education and welfare. Taco Respublic's national animal is the cat, which frolics freely in the nation's many lush forests, and its national religion is Blue Öyster Cult.