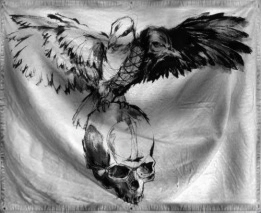 The Exiled Immortal Empire of Oblitus Terras is a colossal, cultured nation, ruled by Traitor Emperor Zealan with an even hand, and notable for its sprawling nuclear power plants, absence of drug laws, and complete absence of social welfare. The hard-nosed, cheerful population of 8.099 billion Terrasians have some civil rights, but not too many, enjoy the freedom to spend their money however they like, to a point, and take part in free and open elections, although not too often.

The medium-sized, corrupt government juggles the competing demands of Defense, Education, and Healthcare. It meets to discuss matters of state in the capital city of Karasu-Hato City. The average income tax rate is 91.7%, and even higher for the wealthy.

The very strong Terrasian economy, worth a remarkable 1,561 trillion Krists a year, is driven entirely by a combination of government and state-owned industry, with private enterprise illegal. However, for those in the know, there is a large, well-organized black market in Tourism, Information Technology, Book Publishing, and Arms Manufacturing. The private sector mostly consists of enterprising ten-year-olds selling lemonade on the sidewalk, but the government is looking at stamping this out. Average income is an impressive 192,779 Krists, and distributed extremely evenly, with little difference between the richest and poorest citizens.

Only native-born Terrasians who have never left the nation are permitted to run for office, studio executives abandon tragic stories of star-crossed lovers because "it's been done", the environment is gorgeous so long as you're looking up, and postcards from Terrasian driving test centres are popular souvenirs. Crime is totally unknown, thanks to a capable police force and progressive social policies in education and welfare. Oblitus Terras's national animal is the Crows and Doves, which soars majestically through the nation's famously clear skies, and its national religion is Primordial Sky Aspects.