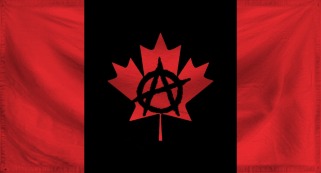 The Anarchists Not Marxists of Marxist Canada is a colossal, genial nation, ruled by The People's Council of the FCC with a fair hand, and renowned for its keen interest in outer space, ban on automobiles, and devotion to social welfare. The compassionate, democratic population of 6.824 billion Anarchists are free to do what they want with their own bodies, and vote for whomever they like in elections; if they go into business, however, they are regulated to within an inch of their lives.

The enormous, liberal, outspoken government prioritizes Education, although Administration, Healthcare, and Environment are also considered important, while Defense and Spirituality receive no funds. It meets to discuss matters of state in the capital city of Toronto. The average income tax rate is 95.2%.

The frighteningly efficient Anarchist economy, worth 981 trillion Non Applicables a year, is driven entirely by a combination of government and state-owned industry, with private enterprise illegal. The industrial sector, which is highly specialized, is mostly made up of the Information Technology industry, with significant contributions from Tourism and Book Publishing. Average income is an impressive 143,897 Non Applicables, and distributed extremely evenly, with practically no difference between the richest and poorest citizens.

There is no other place with more lab coats per square mile than former houses of worship, 'The Anti-Government Hour' is a popular programme on many of Marxist Canada's radio stations, billions of Non Applicables are spent to take high-quality photos of the Wildcat Nebula, and a suspicious number of male students have joined the Ladies' Wrestling League. Crime is totally unknown. Marxist Canada's national animal is the Wildcat, which frolics freely in the nation's many lush forests, and its national religion is Atheism.

Marxist Canada is ranked 219,981st in the world and 13th in The Revolutionary Communist Alliance for Greatest Rich-Poor Divides, with 1.32 Rich To Poor Income Ratio.

Most Recent Government Activity: 11 days ago