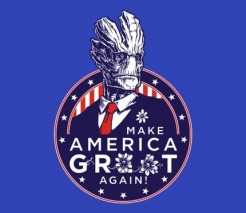 The Groot of Groot is a gargantuan, genial nation, ruled by Groot with an even hand, and remarkable for its otherworldly petting zoo, rampant corporate plagiarism, and complete lack of prisons. The compassionate, hard-working, democratic population of 14.392 billion Groot enjoy extensive civil freedoms, particularly in social issues, while business tends to be more regulated.

The large government juggles the competing demands of Healthcare, Education, and Environment. It meets to discuss matters of state in the capital city of Groot. The average income tax rate is 66.6%, and even higher for the wealthy.

The powerhouse Groot economy, worth a remarkable 1,171 trillion Groots a year, is quite specialized and led by the Information Technology industry, with major contributions from Tourism, Arms Manufacturing, and Trout Farming. Black market activity is notable. Average income is 81,419 Groots, and distributed extremely evenly, with little difference between the richest and poorest citizens.

Court cases mostly involve lawyers shouting questions at witnesses giving silent shrugs, advertisements read like science journal articles complete with extensive references, the "daily grind" consists of levelling up in tedious video games, and lobbyists are trying to convince government to recategorize most natural disasters as "non-critical naturogenic inconveniences". Crime, especially youth-related, is totally unknown, thanks to a capable police force and progressive social policies in education and welfare. Groot's national animal is the Groot, which frolics freely in the nation's many lush forests.

Groot is ranked 118,258th in the world and 33rd in One big Island for Highest Wealthy Incomes, with 104,148 Standard Monetary Units.

Most Recent Government Activity: 101 minutes ago