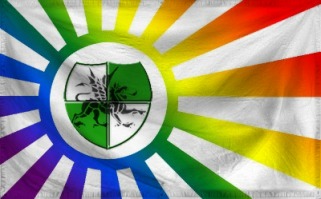 The Socialist Federation of Genesis Fifteen is a gargantuan, genial nation, ruled by Prime Minister Hewitt with a fair hand, and remarkable for its rampant corporate plagiarism, keen interest in outer space, and punitive income tax rates. The compassionate, democratic, cheerful population of 27.861 billion Genesians are free to do what they want with their own bodies, and vote for whomever they like in elections; if they go into business, however, they are regulated to within an inch of their lives.

The medium-sized, liberal government juggles the competing demands of Education, Environment, and Healthcare. It meets to discuss matters of state in the capital city of Genesis. The income tax rate is 100%.

The frighteningly efficient Genesian economy, worth an astonishing 11,225 trillion Genesis Credits a year, is driven entirely by a combination of government and state-owned industry, with private enterprise illegal. The industrial sector, which is quite specialized, is led by the Tourism industry, with major contributions from Book Publishing and Information Technology. Average income is an amazing 402,914 Genesis Credits, and distributed extremely evenly, with little difference between the richest and poorest citizens.

High school bands practice by moonlight, bus ads propagandize causes ranging from sexual revolution to religious pogroms, the amount welfare recipients spend on fertilizer has exploded, and citizens are strongly encouraged to breathe less so as to limit the carbon footprint. Crime is totally unknown. Genesis Fifteen's national animal is the Raccoon, which frolics freely in the nation's many lush forests.

Genesis Fifteen is ranked 3,168th in the world and 6th in Gay for Largest Populations, with 27.9 billion Capita.