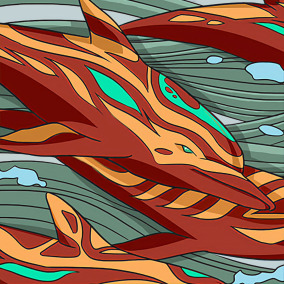 The Dreaming City of Fractethyst is a massive, environmentally stunning nation, ruled by Sosu with an even hand, and renowned for its state-planned economy, otherworldly petting zoo, and pith helmet sales. The compassionate, hard-working, democratic population of 1.093 billion Fractals have some civil rights, but not too many, enjoy the freedom to spend their money however they like, to a point, and take part in free and open elections, although not too often.

The medium-sized government juggles the competing demands of Industry, Education, and Administration. It meets to discuss matters of state in the capital city of Mriya. The average income tax rate is 71.2%, and even higher for the wealthy.

The frighteningly efficient Fractal economy, worth 160 trillion Coins a year, is driven entirely by a combination of government and state-owned industry, with private enterprise illegal. However, for those in the know, there is a large, well-organized black market in Information Technology, Tourism, Retail, and Book Publishing. The private sector mostly consists of enterprising ten-year-olds selling lemonade on the sidewalk, but the government is looking at stamping this out. Average income is an impressive 146,721 Coins, and evenly distributed, with the richest citizens earning only 2.3 times as much as the poorest.

Intelligence analysts spend most of their time looking at embarrassing photos on social media sites, lawyers are ordering red ink and 'Cease and Desist' rubber stamps in preparation for the return of copyright law, the nation's spies are always on break time, and naval armadas borrow their formations from synchronized swimming handbooks. Crime, especially youth-related, is moderate, with the police force struggling against a lack of funding and a high mortality rate. Fractethyst's national animal is the Grey Catbird, which soars majestically through the nation's famously clear skies.

Most Recent Government Activity: 16 hours ago

The Republic of Western Sol,