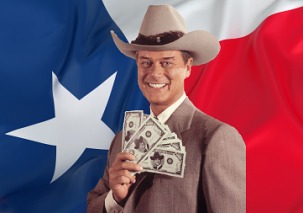 The Barnes-Free Conglomerate of Ewing Oil Co is a gargantuan, orderly nation, ruled by John Ross Ewing Jr with an iron fist, and remarkable for its complete lack of prisons, public floggings, and free-roaming dinosaurs. The hard-nosed, hard-working, cynical, humorless population of 27.167 billion Oilers are rabid consumers, partly through choice and partly because the government tells them to and dissenters tend to vanish from their homes at night.

The minute, corrupt, pro-business government, or what there is of one, juggles the competing demands of Law & Order, Industry, and Defense. It meets to discuss matters of state in the capital city of Dallas. Income tax is unheard of.

The frighteningly efficient Oiler economy, worth an astonishing 23,631 trillion Petrodollars a year, is driven almost entirely by the private sector, which is broadly diversified and led by the Arms Manufacturing industry, with major contributions from Retail, Uranium Mining, and Gambling. Average income is a breathtaking 869,848 Petrodollars, but there is an enormous disparity between incomes, with the richest 10% of citizens earning 5,205,088 per year while the poor average 66,068, a ratio of 78.8 to 1.

Most Oilers would sell their own grandmother, preschools put children down for naps with milk, cookies, and a gruesome story of vengeance, Ollie the Oiled Seal welcomes throngs of tourists to the newly opened Oil Oasis Water Park, and only 'organics' are permitted to be citizens. Crime, especially youth-related, is totally unknown. Ewing Oil Co's national animal is the Budweiser Ferret, which is also the nation's favorite main course, and its national religion is the Holy Capitalism.

The United Republics of Texas,