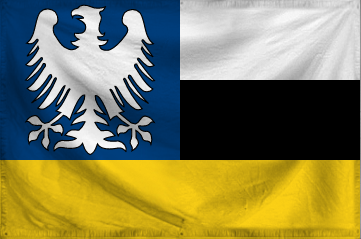 The People's Republic of Derfolkien von Vorner is a huge, orderly nation, remarkable for its keen interest in outer space, avowedly heterosexual populace, and irreverence towards religion. The hard-nosed, hard-working, cynical, humorless population of 366 million Vornerians are ruled with an iron fist by the corrupt, dictatorship government, which oppresses anyone who isn't on the board of a Fortune 500 company. Large corporations tend to be above the law, and use their financial clout to gain ever-increasing government benefits at the expense of the poor and unemployed.

The relatively small, corrupt, moralistic, pro-business, well-organized government juggles the competing demands of Defense, Law & Order, and Industry. It meets to discuss matters of state in the capital city of Vohertz. Citizens pay a flat income tax of 15.7%.

The frighteningly efficient Vornerian economy, worth 45.4 trillion VornerMarks a year, is broadly diversified and led by the Information Technology industry, with major contributions from Retail, Arms Manufacturing, and Automobile Manufacturing. Average income is an impressive 123,981 VornerMarks, but there is a large disparity between incomes, with the richest 10% of citizens earning 606,904 per year while the poor average 14,529, a ratio of 41.8 to 1.

Kids these days know how to throw a proper punch, giant beards and handlebar moustaches are increasingly popular, the government loves seeing the little people fight, and the nation's forests are full of treasure hunters in military-grade survival gear. Crime, especially youth-related, is totally unknown, thanks to a well-funded police force and progressive social policies in education and welfare. Derfolkien von Vorner's national animal is the Roman Eagle, which teeters on the brink of extinction due to toxic air pollution.

Derfolkien von Vorner is ranked 55,327th in the world and 30th in Doing a little trolling for Largest Cheese Export Sector, scoring 3,283.24 on the Mozzarella Productivity Index.