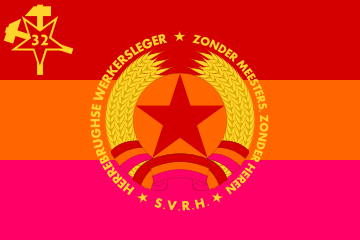 The Herrebrugher Workers' Army of De 32ste Volksdivisie is a gargantuan, socially progressive nation, notable for its state-planned economy, punitive income tax rates, and devotion to social welfare. The democratic population of 18.461 billion workers' soldiers love a good election, and the government gives them plenty of them. Universities tend to be full of students debating the merits of various civil and political rights, while businesses are tightly regulated and the wealthy viewed with suspicion.

The enormous, socially-minded, outspoken government juggles the competing demands of Welfare, Healthcare, and Education. The average income tax rate is 70.0%, and even higher for the wealthy.

The sizeable but stagnant workers' soldier economy, worth 83.2 trillion guilders a year, is driven entirely by a combination of government and state-owned industry, with private enterprise illegal. However, for those in the know, there is a slick, highly efficient, quite specialized black market in Trout Farming, Door-to-door Insurance Sales, Furniture Restoration, and Cheese Exports. The private sector mostly consists of enterprising ten-year-olds selling lemonade on the sidewalk, but the government is looking at stamping this out. Average income is 4,505 guilders, and distributed extremely evenly, with practically no difference between the richest and poorest citizens.

Crime is totally unknown, thanks to a capable police force and progressive social policies in education and welfare. De 32ste Volksdivisie's national animal is the lion, which frolics freely in the nation's many lush forests.

De 32ste Volksdivisie is ranked 45,448th in the world and 962nd in the Rejected Realms for Best Weather, with 110 Meters Of Sunlight.

Most Recent Government Activity: 10 days ago