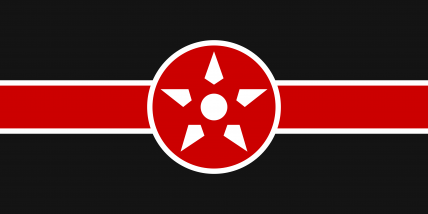 The People's Republic of Aryax is a massive, environmentally stunning nation, ruled by Stanislav Tyrankov with an iron fist, and notable for its compulsory military service, keen interest in outer space, and soft-spoken computers. The hard-nosed, cynical, cheerful population of 1.5 billion Aryaxians are ruled without fear or favor by a psychotic dictator, who outlaws just about everything and refers to the populace as "my little playthings."

The enormous, corrupt, moralistic, socially-minded, well-organized government juggles the competing demands of Law & Order, Defense, and Education. It meets to discuss matters of state in the capital city of Arkanoviverna. The average income tax rate is 95.9%.

The frighteningly efficient Aryaxian economy, worth 218 trillion units a year, is driven entirely by a combination of government and state-owned industry, with private enterprise illegal. The industrial sector, which is fairly diversified, is led by the Information Technology industry, with major contributions from Arms Manufacturing, Trout Farming, and Uranium Mining. Average income is an impressive 145,563 units, and distributed extremely evenly, with practically no difference between the richest and poorest citizens.

Government bureaucrats shut down teenage yard-raking businesses for being counter-revolutionary, citizens who don't attend the nation's massive military parades tend to disappear overnight, the Farmer's Almanac is the most popular college textbook, and citizens are told that foreigners are hungry ghosts who eat the flesh of the overly curious. Crime, especially youth-related, is totally unknown, thanks to the all-pervasive police force and progressive social policies in education and welfare. Aryax's national animal is the orca, which frolics freely in the nation's sparkling oceans.